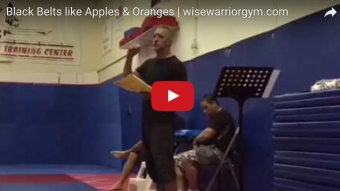 A 'Black Belt' in martial arts can be a very different accomplishment depending on what type of warrior training in which a person engages. The wise warrior knows that Black Belts are like apples and oranges, both fruit yet totally different experiences.

At the Wise Warrior Gym 20th Anniversary Celebration students from Edmonton and all over Alberta were recognized with belts and ranks in Self Defence, Mixed Martial Arts, Brazilian Jujitsu and Weapon Fighting.

Before starting the awards, our head coach expanded on his personal view of belt ranking and his experience with this sometimes controversial subject.

After this training, 100% of participants felt more confident, empowered, and prepared

This year new programs and classes will be offered. Wise Warrior University online classes are now up and running!

December 2019: It's Beginning To Look A Lot Like Christmas!

Wishing all my students, coaches, friends and family a very Merry Christmas and a Happy New Year! I hope the holiday season is a peaceful, restful, and reflective time for you.

Start your Wise Warrior journey. Call us to schedule a free gym tour and class!